Back to
Man1fest.me
When should you use...

You can show an image on a web page by using the <img> HTML tag, or by adding the image as a background of another HTML element using the background-image  CSS rule. How to make that choice? Short answer: one is related to content, the other one to design.

You're often tempted to employ the background-image CSS property because of how easy it is to control the behavior of the image inside of its container: you can make it contain inside of, or cover the parent container, and precisely position it by setting the point of origin and top and left offset values. But the choice between using the HTML tag or the CSS background-image property shouldn't be made because of that.

The header image here is a decoration. It's not part of the message of the document, it's optional. It should use the background-image CSS property.

Here, the header image is an illustration of the message of the document. It is necessary for the content. It should be an image declared in the HTML file using the <img> tag.

A come back with many faces

Shoot from the hip

Old reflexes are back in a snap. Master shooting from the hip again, be discreet, be patient...

No back screen. Stick your eye to the body. And this doesn't count against your screen time

A come back with many faces

Shoot from the hip

Old reflexes are back in a snap. Master shooting from the hip again, be discreet, be patient...

Live your photography. And this doesn't count against your screen time

The images above are illustrating each of the 3 points. They're part of the content, they're using the <img> tag, and the object-fit CSS property with the value contain in order to fill up their parent container.

Here, the images are merely illustrating the specs, they're more a part of the page design than real content. They're declared using the CSS property background-image, which allow them to be layered and to repeat like a pattern.

As part of the content, included of the flow of HTML elements, images using the <img> tag can — and must — have an Alt description, used to carry their meaning through screen-readers or in any occasion where the images couldn't be loaded or shown.

Use case for using an <img> HTML tag

Use case for using the CSS background-image property

That's not a lot of use cases for background-images. There used to have more, because of the options brought by the background-size CSS property, but the same control is now possible on images using the HTML <img> tag, with the object-fit CS property..

How to control the position of images? 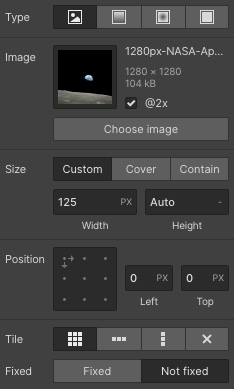 Control the position of an image using the CSS background properties

All those properties are supported by Webflow's Designer UI, in the Style panel.

Control the position of an image using the HTML <img> tag

The background-position property is not yet supported. By default, img-positionvalue, when not declared, is 50% 50%, which means your image is zoomed from its center. You can easily add custom CSS rule to address this. In the example below, the CSS rule tell the image to zoom from its upper left corner.